Roslan Ismail was appointed regional senior vice president for North Asia and America in July 2013. Based in Tokyo, Japan, Roslan oversees operations and drives business and sales strategies in these key markets. Other positions previously held by Roslan include district manager in Kuantan and corporate sales manager in Kuala Lumpur, Malaysia; area manager in Karachi, Pakistan and in Western Australia and Northern Territory states, Australia where he worked in various aspects of the business.

Roslan brings more than 20 years of travel experience, managing core divisions that include marketing and overseeing technical and airport operations.
During his years at Malaysia Airlines, Roslan was involved in various important projects that were successful under his leadership. He relocated to Tokyo from Jakarta, where he was Indonesia area manager for the past three years.

Serving more than 60 destinations in almost 30 countries across Asia, Australasia, the Middle East, Europe and North America including oneworld hubs Hong Kong International Airport, Heathrow (London), LAX (Los Angeles), Sydney Airport and Narita International Airport (Tokyo).
Malaysia Airlines describes its distinctive brand as an extension of the special culture of warmth and friendliness unique to Malaysians. This inimitable Malaysian sense of graciousness is branded as “Malaysian Hospitality” and is symbolized by the acronym MH, which is also the airline’s flight code. 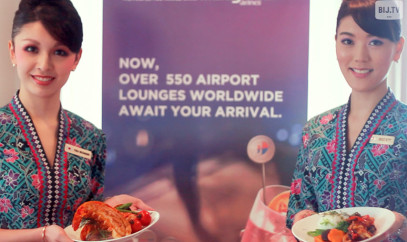 BIJ.TV joins a tasting of the delicious new “Chef-on-Call” menu.

Chef-on-Call lets you order food before you buy it.